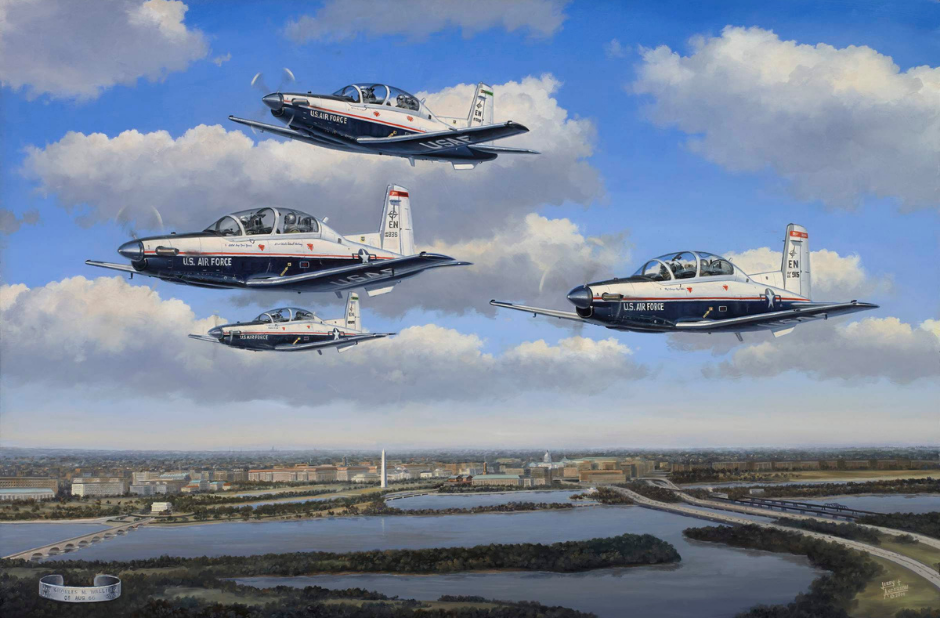 Twenty-two years later in 2012, now Lt. Col. Amy Young was a T-6B instructor pilot with the 80th Operations Group at Sheppard AFB, TX, after a career of flying various aircraft and missions. As a matter of procedure, the Pentagon periodically sent out requests for volunteers to support upcoming memorial services and funerals. One of these requests would soon change her life.

“On the day this particular request came in, I just happened to be at my computer and the one to open the email,” Young said. “As I was scrolling through the attachment, I immediately recognized the name: Lt. Col. Charles Walling.”

“I was absolutely shocked to see his name,” Young said. “As soon as I processed that he had been recovered, I immediately started making phone calls to confirm that they had actually found him and brought him home.”

She immediately initiated the approval process for a “missing man” flyover, a traditional salute for a fallen aviator. Within 24 hours the flyover was approved. The 80th Flying Training Wing’s leadership’s decision was quick and easy: “Absolutely. Let’s put him to rest properly.”

It was a surreal moment for Young. She had always intended to return the bracelet to the family, but not in her wildest dreams did she think she would have the opportunity to help lay him to rest.

Four T-6B aircraft and crews were given the assignment, and departed Sheppard for Washington, D.C., where for the first time she was able to meet Walling’s two sons. On June 15, 2012, Amy led the flight of four T-6B Texan II training aircraft over the burial ceremony of Lt. Col. Walling at Arlington National Cemetery. As an additional gesture of honor, Walling’s name was painted beneath the cockpit of the aircraft flown by Young. She said it was by far the most memorable moment of her Air Force career.

“Final Salute to a Warrior”, the painting that resulted from collaboration with Amy’s husband, depicts the moment in the flyover when a single aircraft pulls up and leaves a gap in the formation to signify the place of the lost pilot.

What makes this painting special was that it depicts all four participating aircraft. Although numerous photos were taken by the pilots during the flyover, there were never more than three aircraft in any photo, as they could not capture the aircraft in which they were flying. The painting would solve that problem.

He supplied me with photos of all of the participating aircraft to make sure the markings were correct and that they were in the correct positions in the formation. He also requested prints of the painting, with additional information about Lt. Col. Walling, to be presented to Walling’s sons. The original oil painting was presented as a surprise at Amy’s retirement dinner. This is her husband’s “edited” account of that moment:

At about 8PM (6:30 – 9 PM event) I asked one of the guys she flew her final flight with to offer a toast. While he was doing that, I was able to get things set up with a sheet over the painting in one of the other rooms. Just after the toast, I asked everyone to come to the room I was in. When Amy saw the painting (with the sheet over it), I could see the surprise in her face. I told her the kids and I had a gift for her retirement. From there, I asked her to explain the missing man flyover that I had sent to you. (Just to note, Jeff and Lisa Walling – Chuck’s oldest son and his wife – were there). Amy relayed the story of the bracelet, the fly-by and the friendship she had formed with the Walling family as a result. As I expected (and later confirmed), Amy thought I had gotten a large photograph (maybe a canvas portrait) of the flyover. I helped her take the sheet off after she had finished explaining the event – the reaction was priceless. She was speechless and it brought her to tears. It was a fantastic moment!! The rest of the group thought it was fantastic as well.  There were several specific comments about the detail, specifically the guys in the airplanes, where they were looking at the time (exactly the way they were at the time) and what they were doing (one of the backseaters taking pictures). Everyone was duly impressed. The guy who made the toast is a good friend and retires in January. He complained about how high the bar had just been set with regard to his impending retirement.

By presenting the painting on Thursday evening, Amy was able to make some decisions about when and where to present the paper print to the Wallings. She did it at the reception after her retirement ceremony. They were thrilled, but not nearly as surprised. It was such an honor to have them at Amy’s retirement and to have such a beautiful gift to present them with. The other Walling print will travel back to Phoenix for Mike and his wife Dena. One of the two plain prints is going to be framed and hung in the squadron operations building.  We are still working on the disposition of the second.

I specifically asked Amy, and you are cleared hot to put the painting, links and commentary on your web page. Like I said, she is thrilled with the painting. From my end of it, I can’t thank you enough. You have far exceeded my expectations – Thank You! If you have the need for client references in the future, I would be honored to be able to help.

It was a privilege for me as an artist to play a small role in the recognition of both the service of Lt. Col. Young and the sacrifice of Lt. Col. Walling.

To clarify, Jerry created an original oil painting of the event. From that painting (with the assistance of our photographer and professional printer) four paper prints were produced for Lt. Col. Walling’s family and for display at the home of his squadron: two with plain white borders and two with special personal information such as insignias for his sons.

The enhanced, paper print that was gifted to the two sons is displayed below. It was produced without the gray border.

You can read the full story here:

You can learn about the POW/MIA bracelets program here: 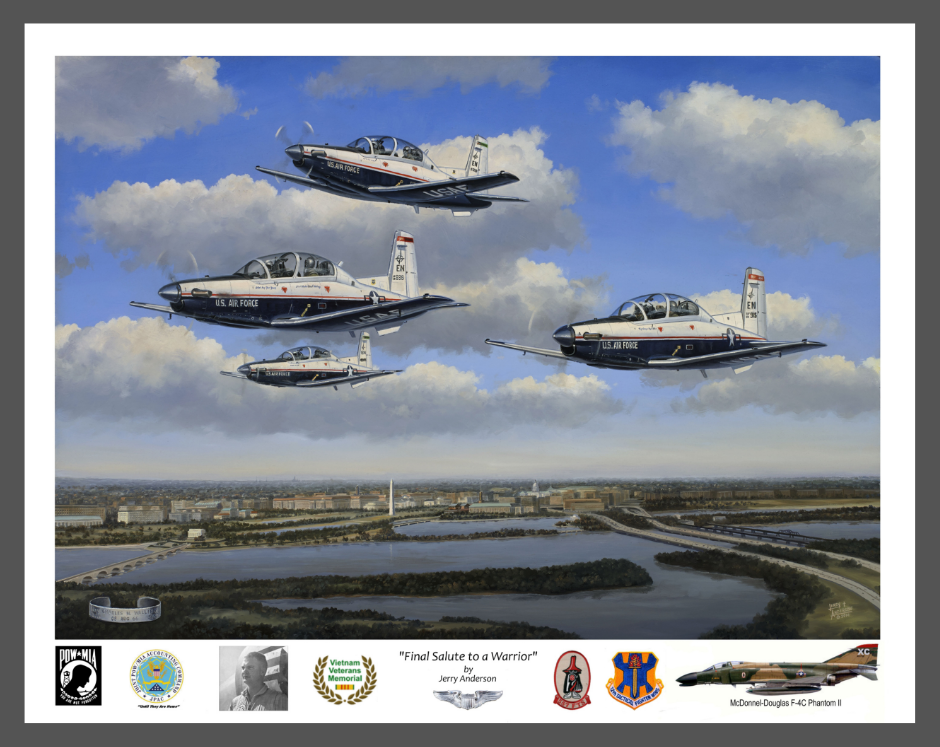